Turbidity is an optical measurement of how cloudy/hazy a liquid is, the higher the turbidity, the less clear the fluid is. Waterways with a high turbidity look cloudy or opaque whilst those with low turbidities look clear.

Turbidity is caused by the scattering of light by suspended particles, particles that are typically too small to be seen individually by the naked eye. In air, a similar effect occurs with smoke, clouds, fog and mist, where light is scattered by small particles, making the previously transparent atmosphere opaque.

Turbidity is measured in Nephelometric Turbidity Units (NTU) and ranges from 0 for completely clear water upwards. Whilst there is no maximum turbidity value, readings beyond 4,000 NTU are rarely used outside of specialist applications as, at this level, the solution is essentially opaque.

As illustrated below, turbidity values of ≤ 15 NTU look completely clear by eye, values around 50 NTU start to appear misty, with values of ≥ 600 NTU starting to become opaque depending on the depth of water under observation. 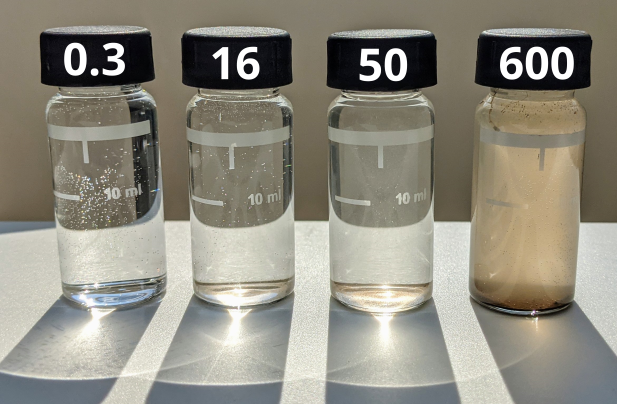 Pictured above: four solutions with turbidities of 0.3, 16, 50 and 600 NTU as indicated by their vial caps.

Broadly,  an increase in turbidity will affect a waterway in three key ways. The impact of these effects will be modified by the location and application of interest as outlined above.

An increase in turbidity can be associated with an increase in pollution from land run-off and insoluble chemicals entering the waterway.

When particles are swept into a waterway/river they can carry insoluble pollutants with them. These pollutants can be bound to the particles’ themselves, enabling insoluble pollutants to enter the waterway. Compounds such as some fertilisers and pesticides are designed to bind to the soil to reduce the rate at which they runoff and impact the local environment. This works until part of the soil itself is washed into the waterway, increasing turbidity and taking these chemicals with it.

Similar effects can be seen in any application where insoluble chemicals or metals can be mobilised into a water system via suspended solids.

High turbidity systems reduce the amount of light available in the water column, and so the potential productivity of the ecosystem.

High concentrations of suspended particles reduce the intensity/depth that light can penetrate into the water body. This negatively affects plant life and many organisms lower down in the food chain. The overall effect of this is a reduction ecological productivity and the number of organisms that it can support.

High turbidity waterways have a higher rate of sedimentation and siltation, leading to the infill of deeper sections of the waterway and greater amounts of dirt build-up on in-river structures.

Due to the higher particulate loading of the water, a reduction in flow speed causes the particles to fall out of solution and settle. Over time, this action can cause muds and clays to form, interfering with machinery and the natural habitat. Higher levels of siltation have been well documented to have negative effects on invertebrates, with sedimentation reducing aquatic biota and increasing likelihood of invasive species replacing local ones.

Home
what are Self-reporting rivers